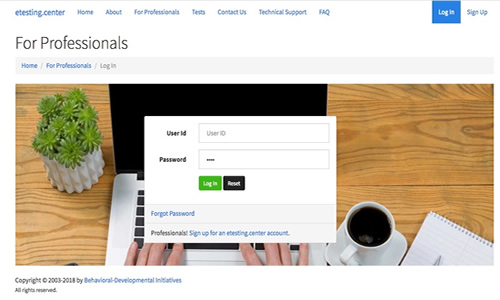 Visit etesting.center a resource for clinicians

If you would like to receive special announcements and updates about B-DI software, send and email to B-DI Technical Support at techsupport@b-di.com with "subscribe" in the body or subject line of your message.

A user has reported that the Distractibility General Impressions items are improperly reversed in the new CTS Questionnaire layout. High scores should be very easily distracted and low scores should be rarely distracted, a change from the infant measures. Users are advised to 'reverse score' this item by subtracting the rated score from 7 to obtain the correct value, before entering it into the Profile Sheet or CTS scoring software. Doing this will correct the issue. Corrected questionnaires have been ordered and can be identified by the newer copyright date (2019 vs. 2016) for TTS, BSQ and MCTQ only. The 2016 EITQ and RITQ versions are correct.

Users have called to report that they are unable to access the Report Writer software due to the crash or upgrade of their computer system that results in inability to access the hard drive on which their software was registered. Users are advised that B-DI will reactivate their registration number for a $25. reactivation fee. Go here to purchase this service. Tech support will notify by email when the registration number is reactivated.

A software printing bug has been reported for the Windows Version 5 BSQ unlimited program. There can be a discrepancy between the category score for Intensity as calculated by the program and as displayed in the numbers box, versus the score printed on the Professional report. The bug appears intermittently. Users are advised to check the scores from the program against the report and correct as needed, treating the score in the program as the correct one. There are also some minor differences in z scores as calculated by the Version 5 program compared with the CTS dos software. These differences are attributable to differences in calculation and rounding of z scores in the two programs.

Due to a rash of bug reports from current CTS Version 4.X users, runtime error 160 on printing has been investigated. Programmers have determined that this problem is occurring on computer/printer combinations where the printer is connected by a USB (Universal Serial Bus) port. Microsoft has determined that DOS-based programs will not run on USB connected printers unless a specific printer driver has been made available. Printer manufacturers are not developing drivers for DOS, only Windows. The CTS software is not affected when the computer is connected by the traditional parallel port (LPT1) or on networked printers, only those connected by USB.

Solutions/workarounds: 1)use CTS software on computers that are networked or connected to a printer via parallel port 2) many USB printers also have parallel ports. Reconnect the printer to the computer with the supplied cable and set up the printer driver following the instructions in the printer manual 3) upgrade to Version 5.0, which is Windows-based and will run on USB connected printers.

A number of users have inquired about applying the Error 200 patch to their diskettes. The patch can be found at http://www.merlyn.demon.co.uk/pas-r200.htm on the web. There are other links to be found if you do a Google search using Error 200 and Turbopascal as keywords. The patch that B-DI used was from Germany, and fixed existing .exe programs. The instructions are in German!

Needless to say, B-DI cannot warrant use of these patches or guarantee specific results (apparently Borland won't either!).

The diskette exchange has been extended to owners of all previous versions of CTS software. Diskettes will be exchanged for $49.95 each plus $4.00 s&H. Mail orders only! Send the old diskette to B-DI 14636 N. 55th Street, Scottsdale, AZ 85254

B-DI is interested in user results with the patches. Please email!

When using Version 4.2P, the software will sometimes open to a full screen, without an MS-DOS window surrounding it. The program runs normally but to close it without completing the entire program, users should press Control-Alt-Delete simultaneously.

This action will give the option to exit the program or restart the computer. Selecting the 'exit' option will terminate the CTS program only.

Programmers at B-DI have identified a fix for Error 200, the bug in the programming language Turbopascal that prevented CTS software from running on computers with processors faster than 233 mhz. The fix involves applying a patch developed in Europe to circumvent the division by zero that afflicts all programs written in Turbopascal. Testing of the patched programs has been successful at processor speeds up to 1 gigahertz. New software produced after November 13, 2000 will be patched and labelled 'V 4.2P'

Version 4.2 of the CTS software has been released. It is y2k-ready and uses 4 digit dates to allow for accurate calculation of ages after the millenium. V4.2 is the last version of the dos-based CTS software. Version 5.0 will be a completely new Windows-based program with full Win95 and Win98 compatibility. Release of V5.0 is scheduled for 2000. Previous purchasers of CTS software may upgrade to V4.2 through the diskette exchange offer detailed in the Whatsnew? page of this website.

Several users have reported an incompatibility problem involving CTS software used with newer computers running versions of Windows 95 and Windows 98. The problem is due to a change in the software libraries used in the newer Microsoft Operating Systems. The updated version of Windows is not backward compatible with TurboPascal programs, such as the CTS software. This is a Microsoft initiated problem and not due to a defect in the software.

Solutions/workarounds: 1)New Windows-based CTS software is being developed and should be available next year; 2) the program may run in MS/DOS instead of Windows 3) the program will run on older machines, using previous versions of Windows and Win 95.

CTS Software Version 4.1 has been released. It corrects all known software bugs including the ones listed below. All new product has been upgraded to V4.1!

1. Older versions (3.0) of the The Carey Temperament Scales Report Writer and Profile Writer software do not work properly on networked computer systems unless the terminal on which the program is run is the terminal attached to the printer (usually the 'server') or has a local printer of its own. Reports to B-DI are that the program will run but stops after it encounters an insurmountable printing error. A fix has been incorporated into Version 4.0.

2. A range problem has been reported for Report Writer protocols where all nine category scores exceed 1.0 standard deviations from the mean. The error is identified by the message: "runtime error 210: at (some address consisting of numbers and letters)." In these protocols, the error causes the program to stop prior to printing. Fortunately, the problem seems to be rare; a fix is planned. Possible 'workarounds': 1) give a second questionnaire to the rater for completion; 2) reduce extremity of ratings by changing ratings of 1 to 2 and 6 to 5. If this method is used, the report should be noted as 'corrected.'

3. Another range bug has been reported in some Profile Writer and Report Writer diskettes when the average of all nine scale scores is greater than 1.0 standard deviations below the mean. The bug causes the program to freeze. A fix is available; the problem is corrected in all new product. Affected customers: email us at the address below and the fix will be sent to you.

4. An error "runtime error 002: at (some address consisting of numbers and letters)" has been documented with Report Writer in situations where the child's middle initial is included in the name field. This problem does not occur in Profile Writer or Quickscore.

Problem: Report Writer creates a text file to save the interpretations of the nine category scores after the program is run. A period is an illegal character in a file name so no file is created. The error occurs when the program looks for the file to save the information and can't find it. Solution: remove the middle initial and run the protocol again.

Some users have reported a problem with printed output where the outline and bars on the temperament profile graph are produced with characters rather than a solid line. This problem occurs when certain incompatible fonts are used for printing the reports. The default font for CTS software reports is Courier although other fonts may also produce good results. Changing the font to Courier solves nearly all reported printing problems. Note: A CTS report may be printed multiple times without expending an additional 'use,' allowing printer settings to be 'tweaked' to produce the best output for the user's setup.

An error has been identified on the RITQ Profile Sheet and in the General Impressions section of the RITQ questionnaire. The distractibility scale is scored in the wrong direction in both of these documents. High scores on the distractibility scale of the RITQ should indicate Nondistractibility or lack of soothability. A low score indicates a highly distractible infant. These errors will be corrected in all shipments after this date. Scoring sheets and software are unaffected by these problems. Customers who have previously ordered RITQs and Profile Sheets may obtain replacements by contacting B-DI via email (bdi@temperament.com). Thanks to Cheryl Fernandes of the Psychology Department at Toronto's Hospital for Sick Children for finding and reporting these errors.

A printer's error has been discovered on some BSQ scoring sheets. The first grayscale column listing activity level items is blank. The item numbers in the column should be as follows:

Corrected sheets will be sent to any user requesting them. Email us with your name, address and the number of sheets needed.

Email us at webmaster@temperament.com with questions or problems you have been unanswered by reviewing these pages.

Readings on clinical practice as well as research and theory related to temperament.

Online discussions of issues of interest to temperament researchers and practitioners.

Get information on temperament

downloaded straight to your computer

A potpourri of information that visitors to this website find useful to take with them!

Answers to questions about B-DI products